Well, this is how it works: You’re young until you’re not, you love until you don’t, you try until you can’t, and you do it all on the radio. This’ll be the first transcript I’ll attempt of The Viper & His Famous Orchestra in their appearances on Marconi’s infernal wireless invention — in this case, from Feb. 11, 2014, from an hour-long profile & performance on WMSE (91.7 on the frequency modulation band of your radio dial in Milwaukee, Wisconsin), for the show Local/Live with hosts Erin Wolf and Cal Roach.

The whole thing can be listened to in its entirety in the stream just below this paragraph, or downloaded as a mp3 podcast at this link. Full transcript of the show after the really large picture.

[VIPER’S NOTE: As of 2/14/16, neither this download link, nor the stream below, appear to be directing in the right place to WMSE’s archive. You’ll have to trust my typing, and enjoy the audio snippets throughout without their full context. Sorry!]

ERIN WOLF: All right! It is Local/Live. For this Tuesday.

ERIN WOLF: How are you tonight, Milwaukee? We’re okay, I think.

ERIN WOLF:We’re doing well. [Laughs.] So this evening in Local/Live, we have a really awesome…kind of a change-up of things from last week to this week. Last week we got to hear the brutal metal of Shroud of Despondency, and this week we’re going to switch it up and do a skiffle band. Holy cannoli! It’s going to be very different.

CAL ROACH: Yeah, very old-timey, very acoustic-based stuff this week, and it’s nice to switch it up every once in a while. This is a band, I don’t think we’ve really had anyone like this on before, at least not in a while.

ERIN WOLF:Well, yeah. Definitely not while we’ve been here. This’ll be fun; I’m really looking forward to it. This band that we’re talking about is The Viper & His Famous Orchestra. And the first place I came across Viper & His Famous Orchestra was at the Kneel to Neil event, which happens every year at Linneman’s, and they did a bang-up job of covering Neil Young, and managed to throw a Violent Femmes cover in there, too, as well.

[VIPER’S NOTE: As you’ll hear in the interview later, this was actually a Lou Reed song called “Dirt.” Reed had just passed away that week, so there was some license to mess a bit with the all-Neil-Young format of the Kneel to Neil event — heck, even Neil Young was playing Lou Reed songs at his Bridge School benefit concert that week! Erin wasn’t wrong to hear some Violent Femmes in that performance, however; Gordon Gano was an important vocal model for me when I start singing with bands in the 1980s, along with the whole idea of playing sweet-and-sour, slash-and-burn music on instruments that had gotten somewhat folked up by that point in pop history. And this particular Lou Reed song has a discursive style of development that is very “Kiss Off” like.]

And I was like, wow! this is crazy. And there’s some ukulele going on, and old-time, like ragtime, jazz influences. And it kind of blew my mind and I was, like, I need to see these guys again! They’re really talented, and really fun. And they have a host of instruments that are not typical to many bands. So this’ll be a fun night.

And, ah, I like what their website says for their bio. They say, they “play the kind of music your great-great-grandparents warned your great-grandparents about.” You get the idea that it’s very old timey. They refer to the term “skiffle,” and, ah, you know, it’s kind of a… it’s known for using a lot of homemade instruments and stuff like that, so that’s kind of in keeping with the suitcase and the old-timey style. You might… You can recognize, kind of… if you ever listen to very early Andrew Bird’s Bowl of Fire type material, or Squirrel Nut Zippers, they kind of touch on a similar, a similar kind of style as some of that stuff, too. Those guys kind of got lumped in with a “swing revival,” but I think there was a lot more going on in terms of, like, the old-style folk, and almost kind of a skiffle type of sound with them too. So, should be a… should be a fun time.

ERIN WOLF:Absolutely! And, we dig a little deeper, and find out that the leader of the group, Ryan Jerving, has kind of steeped himself in this music and culture. He is a professor, and he teaches writing, and he’s also written about musical history, particularly jazz, which is really interesting. And he, I think, uses a ukulele as a teaching tool in his classroom which is, really cool!

[VIPER’S NOTE: It is really cool! Technically, though, I’m not a professor these days, except in the more-or-less accepted way that Erin is using Professor/Doctor interchangeably. (The distinction is that a Doctor has a degree, but a Professor has a job!)]

This is a band with some character (laughs), so it’ll be a lot of fun to hear these songs come to life. It’s storytelling music. So, I think it should be a fun one, just to say briefly.

CAL ROACH: Yeah, definitely. So, ah, should we give ’em a taste of what they might be able to expect? We’re going to play a track off of the 2002 release, Everything for Everyone, it’s a bunch of covers that they recorded, and, ah, very wide range of different stuff on there.

[VIPER’S NOTE: Actually, the one with all the covers is the 5-song EP called A Song for All Seasons, which I’ll take the opportunity to plug here!]

Back cover art and song listing for Everything for Everyone. See! Only three-and-a-half covers! Three-and-three-quarters if you want to count “El Ultimo en Saber (The Last to Know)” as a Kennett Brothers cover. 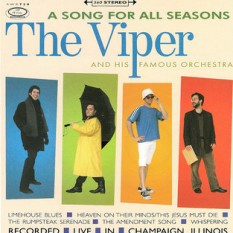 Front cover art for A Song for All Seasons, five-song EP by The Viper & His Famous Orchestra. Designed by Edward Burch.

But what’s the one we’re going to play?

[VIPER’S NOTE: Really, probably just for one reason — the offending party being the fifth word or so of the bridge.]

But this one, we’re going to play. So, without further ado, The Viper & His Famous Orchestra, from Everything for Everyone, released on Trouble-with-a-Capital-T records. This is “Hey! Rounders,” here on WMSE.

ERIN WOLF:All right. That was… [interrupted by recorded inter-track banter and mild obscenity from CD as it continues to play] NUTS! NUTS! That’s what happens when you don’t look at the CD player to see if it’s still going. Bah-dum-bump-CHING. Anyhoo…

ERIN WOLF: Cal! So, “Hey! Rounders”: the name of the song from The Viper & His Famous Orchestra.

CAL ROACH: Yeah, you get a little bit of that blues feel, a little folk, a little jazz: all those elements kind of swirled together in that… that tune, and that album.

CAL ROACH: Really, there’s a lot of different stuff. They even do George Gershwin’s “Rhapsody in Blue” on there: very, very entertaining. Yeah, you might even hear some yodeling tonight. Never know what they might throw in.

ERIN WOLF: Yeah, I’m excited to get this rolling. And they’re going to go live on the air in about… less than a minute, so we’re gonna… gonna get that rolling into your ears. But first, the official opener spot, to make it all official, from our fine friends at K-Nation. We’ll be right back.

THE VIPER: The Viper & His Famous Orchestra live on WMSE. We’re going to play for you the “Ukulele Rhythm.” And this one starts with a poëm:

Modern science tells us
That everything around us
And everything we’ve found us
With patents can be bound us.

But I’m here to tell you, Icky Jeff,
That some things can’t be owned
Like soybeans from Monsanto
Or rGBH.

[Then, The Viper & His Famous Orchestra play “Hotzeplotz Calls”]

The Viper & His Famous Orchestra are no strangers to heartbreak. If you are, then count your blessings, because this song is for you.

[Next, the Viper & His Famous Orchestra play “Heartbreak for Beginners”]

THE VIPER: And for our final song of this live radio set on WMSE, in Milwaukee, streamable around the world, we’re going to bring you a song fit for the season. Yes, it is the season, and that’s why The Viper & His Famous Orchestra bring you “The Yodeler’s Christmas.” You ready, fellas?

THE VIPER: All right.

[Finally, The Viper & His Famous Orchestra play “The Yodeler’s Christmas”]

Part 2, featuring the interview with The Viper & His Famous Orchestra, and more live performances, now available here! Tune in, turn on, drop D.