If you’re in Madison, or can get there by hook or by crook, then please think about coming out. This will be the last of our summer-ish shows on the outdoor patio, unless the thunder speaks and a damp gust brings rain over the arid plain and dead mountain mouth of carious teeth that cannot spit.

Opening will be The Viper & His Second String. The Second String features me, Madison’s own Rob Henn, 52nd Street’s own John Peacock and a washtub bass, roaming wild and off-mic as we invade your personal space. The Own Sins Writ Large in Others add Jerry Shelato. Long-time listeners first-time callers will remember Jerry from our set performing music from The Simpsons at the Great Cover-Up in Champaign, Illinois in 1998. You will remember, won’t you?

Or how about this, from a really, really hot day in Champaign in 2009? (That’s not me and John in the middle.) 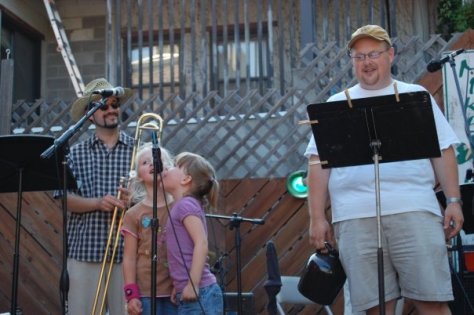