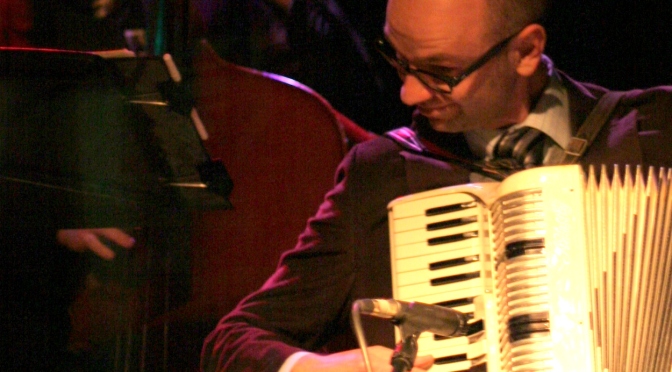 Like a bad penny, and like clockwork — provided you keep a very slow clock, and we’re talking like a Long-Now-style 10,000 Year Clock — The Viper and His Famous Orchestra show up every two years at Linneman’s Riverwest Inn in Milwaukee to take their merry part in the annual WMSE/Bridge School benefit show and Neil Young tribute concert known as Kneel to Neil.

Clockwork, on a very Viper scale.

What this means is that when we do our bit this upcoming Saturday night (November 14, 2015 — come and see us!) it’ll be our third time doing it. That’s a lot of pressure. What’s left to be done? How much deeper can we possibly kneel to Neil? If we kneel first, will the faith come? To answer these and other questions, we’ll have to go back to the first two times we played… back in time! Back to the future! Let’s wind up the wayback machine and set it for November 11, 2011. We were younger then. We were all so much younger then. Were any of us ever so Young?

When organizer Chris DeMay et. al. invited us to play Kneel to Neil show our first time, I was thrilled but, frankly, kind of paralyzed. I’ve been trying to cover Neil Young since I was in high school and figured out how to use my parent’s double tape deck and a Radio Shack microphone to “multi-track” myself harmonizing with “Harvest.” This involved some literal kneeling as the stereo was on the floor and the mic chord was only about two feet long.

But in 2011, what could the Orchestra do that everyone else who knew this was nowhere wouldn’t already be doing, and louder? The answer:

“Tonight’s the Night I’m Going to Rock You Tonight”

We decided to embrace this particular icon’s deeply ingrained iconoclasm. No one is less likely to kneel to Neil than Neil himself, and we went ahead with that foggy notion as our guiding light. Seafarers, beware.

Now, it just so happened that the date of the show — 11/11/11 — also made this date Nigel Tufnel Day. And, it also just so happened that Neil Young’s dark, sublime, and majestic “Tonight’s the Night” made for a perfect mash-up with Spinal Tap’s decidely un-dark, un-sublime, but still pretty fricking majestic “Tonight I’m Gonna Rock You Tonight.” We couldn’t help ourselves, and we went to eleven.

If you’ll forgive the odd dimensions of this footage, this is what that looked like (thanks to Sue Peacock for filming and posting this).

We knew there was some heartfelt musical gold to be mined in some of the more unbeloved crevasses of the Neil Young multiverse. (Probably some pumas, too.) And there was a nice long stretch in the early 1980s where our hero seemed to be releasing records designed to alienate all but his most devoted fans and piss off his record company. Exhibit A: Everybody’s Rockin’. This 1983 quasi-rockabilly album found Young working with a proto-Jersey Boys outfit called the Shocking Pinks and is only 25 minutes long, apparently because the record company pulled the plug on it midway through. In fact, Geffen Records sued Young for $3.3 million after this one for pulling out album after album — like the electronica experiment Trans and the straight-up country AND western of Old Ways — that, in their words were “musically uncharacteristic” of Neil Young’s work.

And they were right! In 2015, of course, we know from hearing 36 albums of Neil Young that nothing’s more musically characteristic of a Neil Young album than something musically uncharacteristic of a Neil Young album. As Young later told Mojo’s Nick Kent, “there was very little depth to the material obviously. They were all ‘surface’ songs. But see, there was a time when music was like that, when all pop stars were like that. And it was good music, really good music… Plus it was a way of further destroying what I’d already set up. Without doing that, I wouldn’t be able to do what I’m doing now. If I build something up, I have to systematically tear it right down before people decide, ‘Oh that’s how we can define him.'”

This video for “Wonderin'” got played a lot in the early days of MTV if I’m remembering it right. Or maybe it was just that a clip from it was in an MTV station promo that got played a lot. Anyway, it’s a really funny video for a great song, and Neil Young only looks about half as sleazy as the California automotive hellscape he keeps popping up in.

This is the second song we did from the 1975 album, Tonight’s the Night, which is a great archive of grief, muddling through, and the sound of things falling apart in general. It’s an album especially about exhaustion, and musical exhaustion in particular. As Neil Young sings in one cut called “Borrowed Tune,” a weed-and-tequila-infused take on the Jagger/Richards song “Lady Jane,”

And in “Speakin’ Out,” Young pulls a similar job on a more unlikely source. He writes about about going out to see a show, eating popcorn, getting lost in the cartoon, and watching a movie whose plot “was groovy — it was outta sight!” The song uses part of a melody from a pretty obscure Doc Pomus / Mort Shuman tune called “Doin’ the Best I Can” (everybody’s dropping those g’s!) from my favorite Elvis Presley movie soundtrack, G.I. Blues.

It’s a deep cut. And Young’s pastiche/parody is pretty, funny, sweet, and pretty damn powerful, pretty damn moving, like a popcorn movie-inspired performance should be. And then there’s this great guitar solo by Nils Lofgren (you can see him doing a backflip in the MTV promo I just posted above).

This song stayed in our own set for a while. Here’s us doing it live on WMSE 97.1 in Milwaukee, Wisconsin back in February of 2014.

A fun one, from 1974’s On the Beach. In re-animating this ode to the life-sucking power of crude oil, we made everybody’s job at Linneman’s a lot harder by asking them to figure out how to mic our washtub bass that we were also planning to use simultaneously as a drum — for one song! In the middle of the set! In the middle of about 20 other bands!

But it sounded great, and we added a new verse of our own (see part 2 for yet another new verse for the “Vampire Blues”).

Our set was really centered around this song, from the 1982 Trans album that’s probably the most difficult Neil Young album for fans of “musically characteristic” Neil Young albums to embrace: light on guitars, long on electronics, vocals filtered through a Sennheiser Vocoder, etc. But Young has talked about this album in a context of learning to communicate with young Ben Young, whose cerebral palsy meant that communication was largely non-verbal, and whose routine at the time involved a pretty intensive regimen of repetition and technology-assisted interaction, including a model train he was able to track switch with a remote control, directing the action with the push of a button. “Transformer Man” is a lovely father-to-child tribute to the transformative power of that relationship. And in that relationship, technology mediates: it distances, but it also bridges. The Bridge School started in part by Ben’s mother Pegi Young — and the occasion for these Kneel to Neil shows — similarly grew out of this context.

Plus it gave us a chance to introduce the Orchestra to John Peacock’s 1970s-ear retro-futurist stylophone — a palm-sized keypad played with plastic stylus, and an addition to our skiffle sound entirely in keeping with the spirit of Trans.

“This Note’s For You”

The Neil Young who writes with such bracing directness about emotional states and life stages we didn’t know we all had until we heard it in one of his songs (“doesn’t mean that much to me to mean that much to you,” right?) also writes with bracing directness about cellulosic ethanol, genetically modified organisms, the lossy quality of mp3s, impeaching the president, government sponsored violence, and corporate sponsored rock. Not for everyone! But definitely for us! And in “This Note’s For You” — the video for which was both banned from MTV and then won MTV’s video of the year award in 1989 — that anti-corporate message gets wrapped in some very corporate sounding 80s blues rock. (I always imagine the band Blues Hammer from the movie Ghost World doing this song.)

Plus, whenever I can find an excuse to break out my electric Konablaster ukulele played through the pocket-sized battery-powered Marshall stack I hang on my belt, I take it! This note’s for you!

Next time, on A Very Viper Kneel to Neil Retrospective…