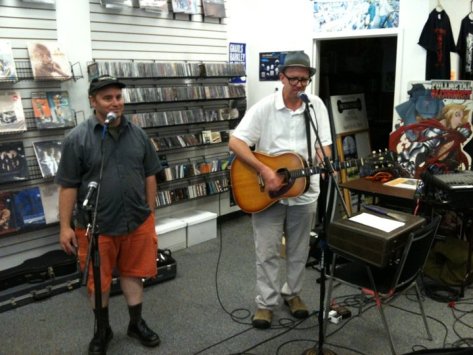 When he was doing his own in-store appearance at Exile on Main Street record store in Champaign, Illinois, Edward Burch was kind enough to invite me to join him. To a ravenous crowd of 1-3 at any given time, we brought it. Aside from the songs on which I harmonized in Edward’s set (“Second Last Call,” etc.), here’s what The Viper played.

In response to the photo above, posted to facebook, John Peacock wrote:

To which I replied:

Ryan here: yes, from the flattened American Girl cap, to the hanging ties on the orange shirt, to the black socks pulled all the way up, to the look on my face that suggests I don’t know I’m standing behind a microphone, I have definitely got it going on. Wonder why Ed didn’t wear shorts?

It may be this photo that inspired the 7th Day Adventist diet that I’ve been following since.

PART ONE OF TWO

Check back tomorrow for the really good stuff.

In the year 2000, the Viper and His Famous Orchestra holed up for a couple of days in the smallish “B” room of a studio in Urbana, Illinois to record the tracks that would see light of day in 2002 as Everything for Everyone.

Placing the mics, twiddling the dials, and setting the vibe for the way the session would go — in a word, producing — was Jay Walter Bennett. We knew Jay through our suitcase player, Edward Burch, with whom Jay shared an apartment and with whom Jay would write and play and record a lot of great music (notably in the record they would put out as Jay Bennett & Edward Burch in 2002, The Palace at 4 a.m. (Part 1)).

Jay recorded us pretty straight — all of the performances were done live in one or two takes, in mono, a lot of the sound going through a single room mic, with only a few well placed overdubs recorded later. These included Jay’s organ backgrounds on the middle-eight of our cover of Angie Heaton’s “Pretty Is as Pretty Does.” Have a listen (the organ comes in at 1:44):

Pretty Is as Pretty Does

As we prepare to play at a memorial show for Jay this weekend in Champaign, Illinois, I thought it would be worthwhile to check in with the other members of the Orchestra to see what they remembered about those sessions, about mixing the tracks with Jay the following year, and about Jay in general. What follows is my e-mail interview with trombonist Rob Henn and bassist Riley Broach, edited for concision, coherence, and effect. Since Edward Burch knew Jay in a way that the rest of us really didn’t, I’m going to append his comments, unedited and untouched, to the end of the second post.

THE VIPER: Hey Rob, Hey Riley. I’m going to put together a post about our time with Jay Bennett and what it was like to record with him. Not overly reverent or sentimental — just kind of a matter of fact account of the kind of guy he was. So let me start out by asking what kind of contact you had with Jay before we recorded with him. For me, it was mostly through Edward [Burch]. And Jay sat in a fair amount with our honky tonk band, the Kennett Brothers — including at least once as the drummer!

RILEY BROACH: I got a call from Ed one day, asking if I could help move a piano up to his loft at 8 1/2 E. Main, which happened to be Jay’s place as well. Jay had just got an inexpensive (perhaps free) piano and needed a bunch of us to haul it 50+ stairs. I can’t remember if Jay or Ed said it but on our way up the stairs we began to falter and one of them said, “flesh heals, wood doesn’t.” I think we all got banged up a little bit hauling that thing and the wood was probably banged up too.

TV: That’s a great story, and words to live by. Though I’m going to point out that their loft was only on the second story. It probably just felt like 50+ stairs.

EDWARD BURCH: I believe the axiom was: “Skin grows back; wood doesn’t.” It was a phrase Jay picked up from the piano player in his country band, Gator Alley, with whom Jay worked briefly years ago as a piano mover. Also, Riley, the piano was on its way down the stairs, not up. We called you when we got to the landing halfway down and realized that with two people we were stuck and the piano was going nowhere. Definitely one of those thankful-for-cellphones moments.

RB: I remember half of the main room at 8 1/2 E. Main having loads of musical gear — all of which, Ed explained, belonged to Jay. Jay wasn’t around much as he was probably on tour with Wilco for many of those years. I didn’t really know much about Wilco, except that they were big. Remember, I was somewhat of a music Nazi back then. If it wasn’t Classical or avant-garde I thought it was crap. However, there were a few times that Jay was around. We (Ed, Jay, & I) probably just hung out eating carry-out, watching [TV?] or listening to some obscure singer-songwriter on record.

TV: Do you recall how we came to record with Jay? I remember it coming up kind of suddenly: the stars aligned and suddenly all the right people (i.e., Jay) and places (i.e. Private Studio) were open.

ROB HENN: Yes, it was a sudden thing: to this day I wish we’d had more time to prepare for it — we hadn’t played together in a few weeks at least, and I was trombonistically out of shape, and then one day it was just, “Come to this tiny garage-like studio in Urbana and record Viper songs for posterity!”

RB: I don’t really remember it being a sudden thing. I probably thought something like: it’s about time! I knew Jay was excited that we were finally recording something as well. He was a great supporter of The Viper & HFO. He didn’t ask for any compensation for his time for all those recordings – did he?

TV: Unbelievably, no. And I think he basically arranged for the studio time at a seriously discounted rate. And the CDs themselves were printed at a discount because of his (and Edward’s) affiliation with Undertow Records. I think the only thing he got out of it, financially, was that he got to keep the master tapes at the end for re-use on other projects. It was a very generous thing he did for us.

What was your impression of Jay as a producer/engineer? And what, if anything, do you remember about how he recorded you?

RH: I don’t have much to offer here. I knew nothing about recording, and Jay and Ed and you seemed content to handle it. It wasn’t particularly interesting or fun for me. I was mostly concerned to make sure my out-of-shape lip held up. I recall only that I thought Jay was professional and that this was the real deal. The comparatively loud sound of a trombone was always a problem in recording, and in a previous attempt at making a demo recording in someone’s living room we had to have me turn away from everyone else in the band in order to play into a mattress propped up against the wall — a really awkward way to play songs with an ensemble, you can imagine — but in this new one we just let a room mic take most of the trombone sound, I believe.

RB: What do you mean by how did he record me? Technically, I had a direct input from a contact pick-up, a microphone inches away from the f-hole, and a room microphone picking up my bass playing. As far as how he edited/mixed my sound, I like the deep bass sound created on that album. It was clear he wanted to capture our live sound and antics. He kept the recording rolling to pick up our banter in between takes. If you listen to the full-length album you can hear a lot of this banter in between the tracks. He knew our strength as a band and did a nice job in capturing it. We were all making each other laugh. Jay included.

VICTOR CORTEZ: [Victor along with Kenneth P.W. Rainey added some of the few overdubs on this recording, playing toy piano and lap steel guitar, respectively, on “Winnebago Bay.”] I’d never met Jay before. I was always a fan of T.L.A. [Titanic Love Affair] and Wilco, of course. I showed up at the house with my toy piano. He kinda chuckled at the sight of it when he was mic’ing it up. I remember there was a close mic and a room mic. For what I was playing, he made me do it a couple of times. So thorough.

Come back tomorrow for the second part of the story — things get interesting, tense, and lovely when we go to mix in the Wilco loft in Chicago.

If you missed our kid-friendly Sunday afternoon show, you missed out on our Presidential Coloring Contest. But it’s not too late: you can still download and print out the PDF of the coloring sheet, complete it (as you complete me) and mail it to Ryan Jerving / 2171 N. Hi-Mount Blvd. / Milwaukee, WI 53208. When I get a chance, I’ll upload any entries I receive to this space and to our new Facebook fan page.

My personal thanks to those who played with the Viper on these and our other summer shows: myself, Edward Burch, Riley Broach, Rob Henn, Kenneth P.W. Rainey, and Victor Cortez — with a special shout out to Jerald Shelato who joined us the rest of us Wildcats on Sousaphone and jug for the Sunday show. And a big thanks to those who gave us an excuse to spend the weekend in our old stomping ground: Matt Mitchell and Elizabeth Majerus for staying married for 10 years, and Mike Murphy of Mike N’ Molly’s for not forgetting about us for almost as long.

Below, I’ve reconstructed the set lists, as best as I can in the dim, receding light of the angel of history’s rear view mirror, the reflection a large catastrophe which keeps piling wreckage upon wreckage as the debris grows skyward. This, is what we call progress?

The shows are Friday night, August 7, 8:00-12:00, with opening sets by the Duke of Uke and His Novelty Orchestra, then Edward Burch and friends. On Sunday afternoon, August 9, 4:00-7:00, we’ll be doing a family-friendly show in the same location with a Viper sandwich of Edward Burch in the middle.

If you are lucky enough to call Elizabeth Majerus and Matt Mitchell friends, you might also be able to catch us playing at their 10-year anniversary party on Saturday evening…with a surprise guest suitcase player.

The Viper and His Famous Orchestra played two shows this past weekend in Chicago, our first shows with the full band since 2002, and our first shows to feature a significant amount of new material since 2000, when the Viper up and left for Ankara, Turkey.

Both shows were a welcome challenge and a lot of fun, not least for the wide-ranging and moving sets that Edward Burch played at each of them with various stellar collaborators (LeRoy Bach, Steve Frisbie, Kenneth Rainey, John Peacock, and Riley Broach).